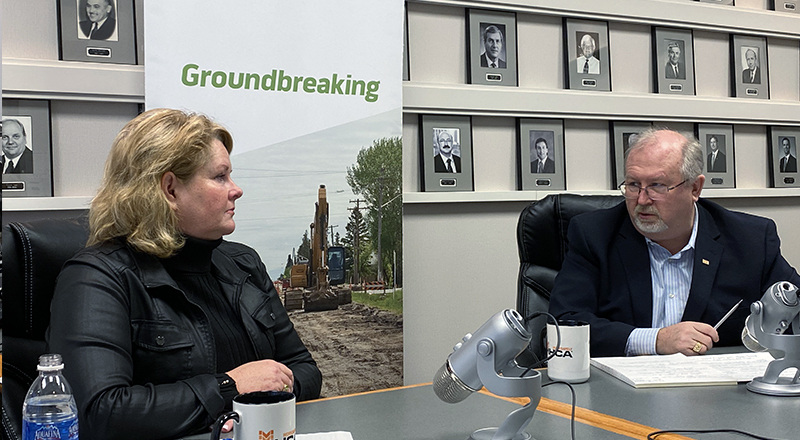 CentrePort Canada is a vital economic development proposition for not just the Capital Region but all of Manitoba, Western Canada and the country at large, the inland port’s president says, noting the launch of its rail park is a real turning point.

“It’s turning our project from a series of industrial developments to a true inland port,” President and CEO Diane Gray told those who tuned into the first of MHCA’s 2022 Breakfast with the Leaders virtual events. Some 50 participants, from across the construction industry and business community, registered for the event.

Gray presented an overview of the history, development and future of the inland port. Its full development impact includes 98,377 person-years of employment, $1.18 billion in provincial tax revenue and a $7.9-billion boost to Manitoba’s GDP.

Access to a dedicated rail facility at the inland port is turning the heads of investors, both large companies and investment managers, because it moves CentrePort Canada to a higher level of operation.

It attracts the attention of very large companies, employing 100s or 1,000s of people, that now know locating at CentrePort will one day be able to offer reduced rail shipping costs to move goods or commodities more efficiently to domestic, continental or foreign markets.

All of this is good for the trade profile of Manitoba’s Capital Region and the province, but also for Western Canada, with its ties to land and marine ports. Gray said rail is looking increasingly attractive for shipping, as land transportation fuel costs rise. Most auspicious is CP Rail’s buy-out of Kansas City Southern rail line, which will create the first single-line rail network connecting US-Mexico-Canada and open new options for domestic intermodal shipments.

On the issue of trade, Gray told MHCA’s President Chris Lorenc she agreed that a Western Canadian Trade Gateway and Corridor Initiative was important to raising the West’s trade productivity and profile, and by extension that of Canada.

What Canada needs is to re-focus its infrastructure investment programs to make its investment dollars work harder, for long-term returns to the GDP.

Historically there have been good programs that enhanced trade gateway and corridor infrastructure across the West. But, Gray said, in more recent years we’ve seen gaps, where funding programs were not used as strategically, in integrated projects, as they could have been.

The supply chain challenges that have appeared recently underscore the need to focus on the connectivity of trade infrastructure and links to continental and overseas markets, she stressed.

The pandemic’s economic slowdown did not really disrupt the development at CentrePort Canada, Gray said. In fact, moving ahead with the rail park has caused a lot of investors as well as those in government offices to take note of the prospects the inland port presents.