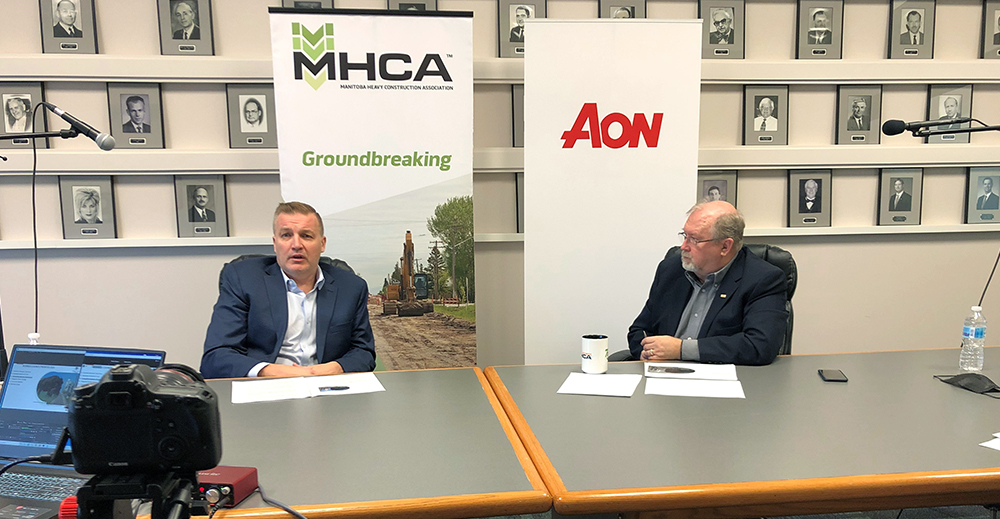 Governments must work now to strategically invest in infrastructure, especially the trade and corridors that move people to work and goods to market, to revitalize the economy – and the federal government will have to play a significant role in that, Business Council of Manitoba President Bram Strain said at MHCA’s virtual Breakfast with the Leaders session March 16.

Strain was the second of the speakers in the webinar series. Finance Minister Scott Fielding told a large audience on February 16 that he, too, regards infrastructure investment and Manitoba Infrastructure’s highway capital program to be vital to moving out of the recession triggered by the pandemic last year.

The leader of the Business Council said that it is important to focus on the physical transportation assets that keep our businesses and people moving to their destinations, but an infrastructure investment plan must also attend to the health and well-being of our population. Water and sewer, water-control structures, health, recreation, as well as arts and culture amenities are important assets in the community, he noted.

On the economic front, Strain underscored that Manitoba has real challenges in keeping its trade transportation routes open, reliable and efficient. Highway 75, for example, connects us to our largest trading partner but in spring typically is threatened with closure due to flooding. If we don’t improve our key “reliability” assets – along with rail and air movement of goods – we’re not going to meet standards of delivery, he stressed.

This is a good illustration of how, when plotting a strategy for increased trade – through new and improved trade gateways and corridors – governments must maintain the infrastructure people and businesses rely on now.

Further, Manitoba cannot go it alone on investing to increase its domestic, continental and global trade.

We need to be part of a Western Canadian trade gateways and corridors initiative to make the transportation system across the region seamless and more efficient, including possibly relocating rail lines in Manitoba, he said. These are the kinds of big “transformational” projects across the West required to get goods moving in and out, quickly and reliably.

The scale of such an investment program demands that the federal government renew its commitment through a similar trade gateways program, as it has in the past, to leverage large investments in co-funding agreements with lower levels of government.

Strain also voiced support for Manitoba Infrastructure releasing a five-year highways capital budget, along with the annual program, so the municipalities would be able to see in advance plans for the provincial roads that they rely on. Finance Minister Fielding also gave the concept of annual and five-year budgets a nod during his February 16 address.

To listen to the Breakfast with the Leaders addresses, click here.