Nicole Chabot takes over as Chair of the MHCA

John Highmoor appointed to Board of Directors 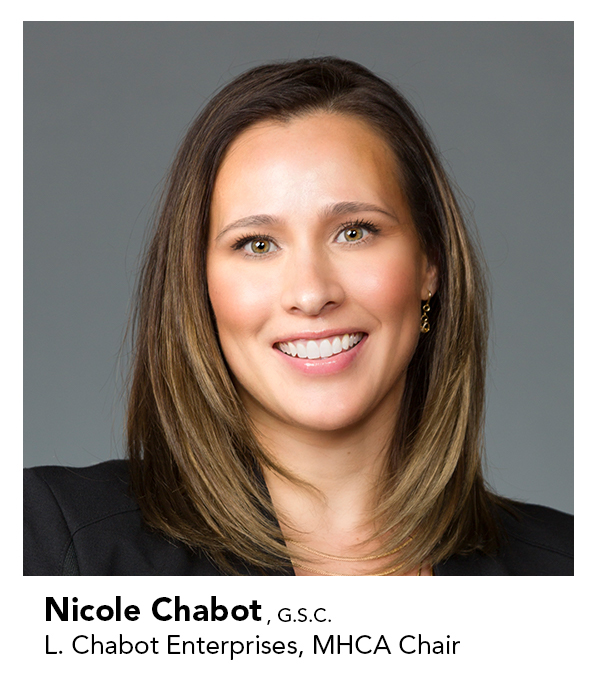 The Manitoba Heavy Construction Association saw the passing of the Chair’s position to Nicole Chabot, Vice-President, L. Chabot Enterprises, today, at the association’s Annual General Meeting. The Awards Event and the AGM were held as a webinar, due to the pandemic restrictions, with 100 members and guests joining in.

In addition to the change in leadership, the Board welcomed John Highmoor as a director. Highmoor is Vice-President of Tri-Core Projects. He takes the seat at the table vacated with the sudden passing last month of long-standing director Ron Duncan, who co-founded Tri-Core with Highmoor in 2003.

Chabot takes over the Chair’s position from Jack Meseyton, who has served in that post for the last two years.

“Nicole is a valuable resource and has been a prominent voice at every meeting with provincial ministers to which the MHCA has been invited in recent years,” Meseyton noted.

“I take the position of immediate past chair now, knowing that the leadership of MHCA and the pressing affairs of the industry rest in capable, impressive hands as Nicole assumes the Chair’s role.”

Chabot thanked Meseyton for his long service to the industry, and in the last two years to the association.

“Jack has given generously of his time and presence when called to the steps of Broadway, for meetings at the MHCA or for important business events, such as dinners with provincial and municipal leaders,” said Chabot, who has served as Vice-Chair of the Board since 2019-19.

“Jack never shied from speaking his piece with his trademark direct but respectful style at these meetings with politicians and senior public servants; he ably represented the perspective of the whole industry, for the whole industry and for the greater interest of Manitobans and the provincial economy.”

The AGM heard Meseyton speak to the MHCA year-in-review, noting several accomplishments through a turbulent time. He noted the association added new members to its roster and that the achievements could not have been possible without the support of the membership.

The new Board of Directors, with executive and committee assignments, is available here.

The full MHCA 2020 Annual Report is available to members here.

Schuler said the investment priorities for his department are 1. safety of our highways and, 2. economic growth through investing in trade corridors – ensuring no matter where they live, work, grow or manufacture, Manitobans will have quick access to an RTAC road for efficient access to markets.

Further, the minister said that MI budgets for highways will not fall below $500 million in each of the next two years. Starting in 2021, for the 2022-23 budget year, the department hopes to consult with the MHCA and its Board of Directors on its annual investment plans.

The minister also presented the MI Project Awards for 2020. The winners are:

Wrobel thanked MHCA and President Chris Lorenc for the dedication to raising the profile and priority of investment in trade transportation across the West and in the country.

Van Buren picked up on that theme, noting that “We can’t take infrastructure investment for granted” calling on all construction associations across Canada to keep pressing for governments to recognize the high return to the GDP that public investment in infrastructure holds. The MHCA presented service awards to long-standing members. They are: