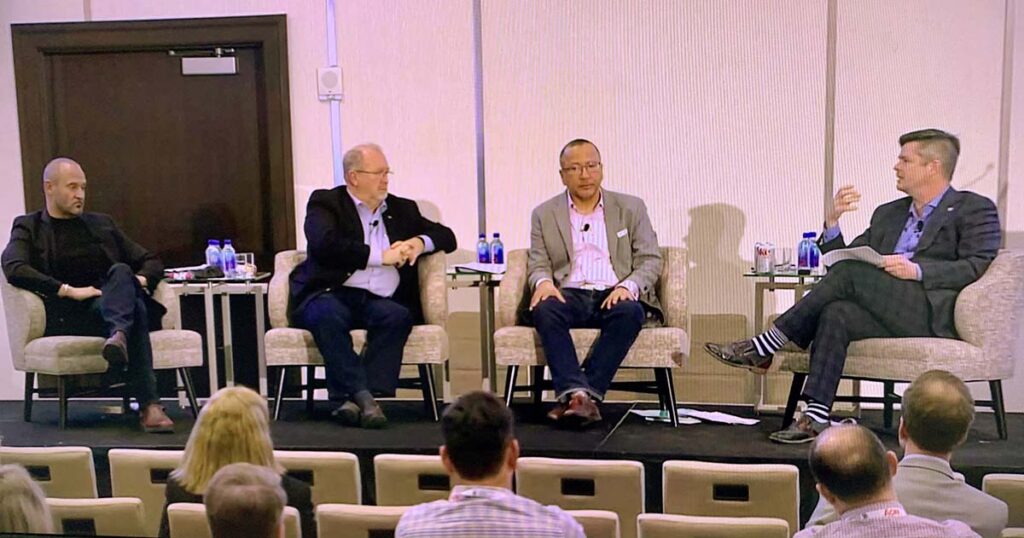 Canadians must become alarmed and engaged in the push for greater and wiser investment in trade-enabling infrastructure because our economy is suffering and so will our national security interests, a panel discussion at the Canadian Construction Association conference this week in Vancouver heard.

Infrastructure investment in Canada is many times lower and far more sporadic, compared to our international peers, said Paul Smetanin, President of the Canadian Centre for Economic Analysis. CANCEA recently prepared a report on the ties between infrastructure, trade and investment for the WCR&HCA.

Smetanin said infrastructure planning and investment have been tossed about like a “political football,” which impairs the ability of business, investors and trade partners to plan.

Further, the extraordinarily low levels of investment will rob the current generation of young Canadians of significant amounts of additional wealth upon retirement, and load the investment deficit on the backs of future taxpayers.

Canada spends half that of its peers on trade corridors and has done so for the past 20 years.

“The level of investment is the largest barrier to economic success and exports,” Smetanin told the room.

Further, investment programs come in spurts and that volatility dramatically reduces the impact of the spending. “This (investment) uncertainty has the same economic impact as if we had stopped immigration completely.”

Lorenc, who also serves as President of the WCR&HCA, said that because Canada’s economy is so heavily dependent on trade – fully 65% of the GDP – it is critical to diversify our markets to protect economic growth. That growth spins off revenues that support our government programs and social services.

“A strong economy enables a respected foreign policy presence, to help advance and protect our security interests. And national security interests include: the stability and protection of shared values, safety, democratic and human rights, economic, social and political freedoms, the freedom from fear, threat, and conflict.”

Tying our trade to the United States and China – our two largest trading partners – imperils our national security, as seen by recent impacts of trade protectionism and weaponization.

The proposed Western Canada Trade Gateway and Corridor Initiative, amassing impressive support from a coalition of business and construction associations, is central to raising Canada’s trade profile because the West is the portal to a vast, diverse Asia market.

“Diversification of our global trade profile, not dependence on a handful of markets, is a strategy imperative which serves western Canada and Canada’s economic growth, social programming & security interests.”

On the issue of trade corridor investment, Carlo Dade, Director of the Canada West Foundation’s Trade and Investment Centre, described information that will soon be published in a CWF report From Shovel Ready to Shovel Worthy.

Dade said Canada’s low and sporadic approach to investment in trade-enabling infrastructure is noticed domestically, by business and investment groups, and internationally, among Canada’s trade markets.

The World Economic Forum and World Bank surveys reveal that confidence in Canada’s ability to deliver the goods has fallen in the last decades. Confidence in the quality of Canada’s trade infrastructure has dropped most precipitously, from a rank of 10th in the world to 32nd in 2019, according to the EF’s Global Competitiveness Index.

In comparison, the United States dropped two places in the same survey period, he noted, setting off alarms in the Biden administration, which has triggered the current infrastructure renewal investment package.

By contrast, in Canada, the federal government is silent about and the public is unaware of the state of infrastructure or investment planning, all the while Ottawa asserts it is spending significantly on the issue.

“Everything that is done today is shown by the market not to be working,” he said.

The problem is partly rooted in the approach to investment – funding programs respond to crises as they crop up; investment is sporadic and focuses on shovel-ready projects to get the money out fast.

More sophisticated approaches taken by other countries instead focus on a shovel-worthy approach to investment planning – looking decades into the future, with consistent funding levels that prioritize and line up projects based on their return on investment, how they serve the national priorities and long-range vision of trade productivity and how each project will mesh with others to amplify the impact, Dade explained.

“If shovel-ready is the mantra you use to describe (infrastructure investment)… you’re starting with an admission of failure,” said Dade.

Even in times of economic turmoil, the shovel-worthy approach works best because you will have on-the-shelf investment projects that are also ready to launch, backed by solid business cases with guaranteed ROI for many years down the road.