Fix Our Roads is MHCA’s ongoing public awareness initiative to keep the need for core infrastructure investment – fixing potholes; improving roads – as a top public and political priority. This is done through the media, often via radio ads, and through efforts of our membership to speak directly to elected and senior officials of governments of all levels.

Our advocacy is rooted in principles of strategic infrastructure investment that grows the economy and is consistent with the best public interest.

‘You shouldn’t need an ATV to drive on our roads’ 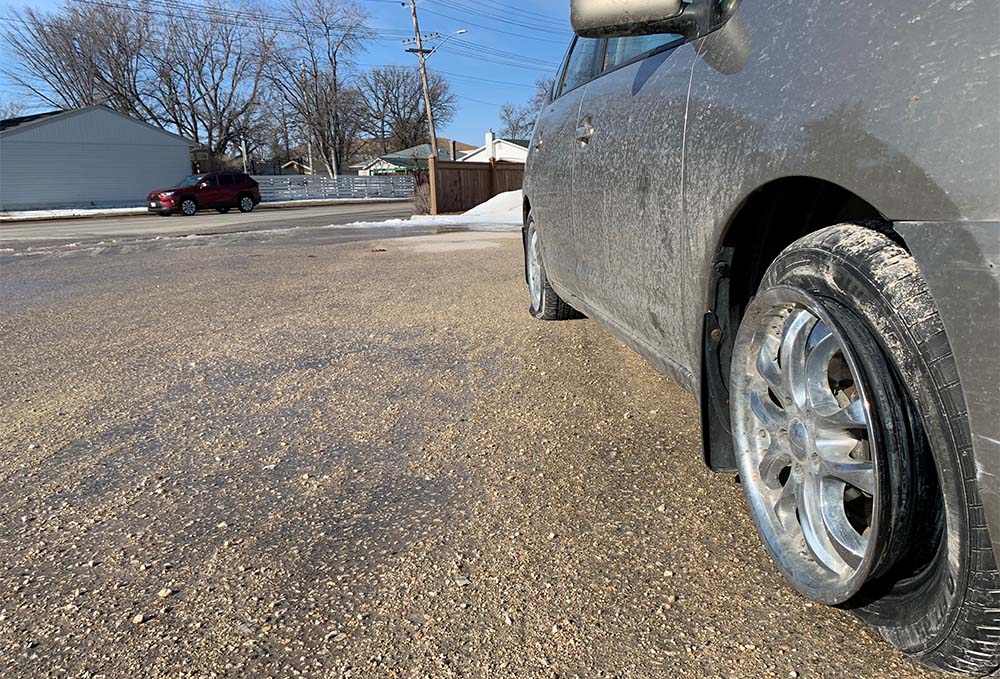 Listen here to Chris Lorenc on the long-standing problem with Winnipeg roads and why a pothole ‘quick fix’ is not the answer.

DRIVE THE CAMPAIGN FOR A NEW FISCAL DEAL FOR MUNICIPALITIES: MHCA

Manitoba’s Budget 2022 sees the highways capital program increasing to $407.954 million, with an additional $60 million carried over from an under-expenditure of last year’s highways budget. Keep reading

Manitoba would be better served if all unexpended budgeted dollars in the highways capital program were used in the same year or carried into future budgets, MHCA President Chris Lorenc said. Read more here.

Winnipeg City Council on December 15 approved, by a vote of 10-6, the 2022 Operating and Capital Budget which holds $164.7 million for local and regional road renewal, and confirms projected budgets for sewer and water main renewals. Read more here.

The City of Winnipeg’s draft 2022 Operating and Capital Budget, released at the Executive Policy Committee today, sets out a total $164.7 million for local and regional street renewal next year, about $2-million more than the forecast published last year.  Read more here.

The Highways capital program should reach roughly $505 million this year and remain at minimum $500 million over each of the next two fiscal years.

The core Highways Capital program rises to a total $398 million.

The provincial government should uncap the potential of its Infrastructure department to drive trade and economic growth for Manitoba and join Western counterparts to make the West a trade superpower. Read more here.

Winnipeg needs to update its assessment of the condition of its streets and roads, and inform taxpayers how it plans to adequately fund the road and bridge renewal budgets. Read more here. 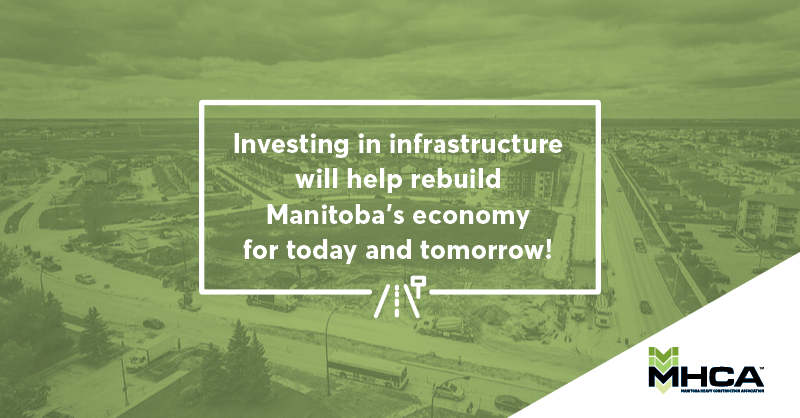 The Manitoba government on May 7 announced it would increase the infrastructure investment plans for the next two years by $500 million, of which will go to resurfacing and repairing highways, and to water & sewer projects.

The Pallister government has increased the Highways Capital budget for 2020 by $12.5 million, to $362.5 million. In addition, it has “rolled over” $5.4 million worth of unexpended funds from 2019’s program. See the Budget Numbers here.

The MHCA in 2020 ensured the Local and Regional Street Renewal Budget did not lose ground, pushing back on the administration’s recommended cuts. This is MHCA President Chris Lorenc’s address to City Council and to the Executive Policy Committee.

The MHCA is looking for the support of members in our advocacy associated with Winnipeg’s 2020 Local and Regional Streets Program. Tell your councilors and Mayor Brian Bowman ‘enough with the cuts!’

Click here to read the full communication sent to members, along with how to contact City Council.

With the return of the Progressive Conservatives to government September 10, the MHCA is urging the province to start anew, rethink and rework the approach to core infrastructure investment. Manitoba needs a sustainable, multi-year plan to address our multibillion-dollar infrastructure investment gaps and move our province – and its municipalities – into a stronger, global trade position.

The MHCA asked the three main provincial parties about their commitments to investing in core infrastructure, should they form government September 10. Here are the responses from each party.

Trade is the heart of Manitoba’s economy, but trade can’t move without strong, reliable roads. This election, MHCA calls upon all parties to make strategic, sustainable infrastructure investment a priority of their campaign platforms. 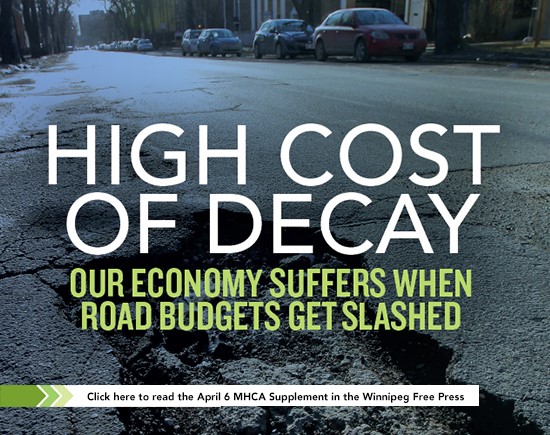 Our highways and urban streets are decaying, rapidly.

The decay is compounded by the fact neither the province nor the municipalities are investing enough in our transportation assets, to pull out of what is called an infrastructure gap – the difference between what we invest annually in roads and what is needed, to bring them to good condition.

MANITOBA: For the record – a review of roads funding decisions

Manitoba’s Budget 2019 sets the Highways Capital program at $350 million, that’s $150 million less than what was promised when the Progressive Conservatives were elected in 2016. Read the Budget 2019 story.

Click here to read a synopsis of the Budget 2019’s We should be investing more, incrementally, each year to fill the gap – the sinkhole funding for core infrastructure.

WINNIPEG: For the record – a review of roads funding decisions

Winnipeg’s residential streets took a huge hit this year, when City Council gutted the local street repair budget in a funding dispute with the provincial government.

The City is awaiting $40 million owed it from the just expired, five-year Manitoba Roads agreement, for work completed in 2018. Further, the province has not renewed the five-year roads agreement, meaning Winnipeg is out a forecasted $174 million from 2019-2024.

How did we get here?

The MHCA to Winnipeg
It is irresponsible for City Council to eliminate residential street work this year, effectively putting Winnipeggers in the middle of a political funding dispute. Winnipeggers pay their taxes – 2% dedicated tax is levied each year, 1% for local streets and 1% for regional streets to fix their crumbling streets. Every budget has elasticity and contingency; find the funds to #FixOurRoads. Rally Winnipeggers to pressure Broadway to live up to the roads funding deal.

The MHCA to Manitoba
Make good on your commitments. Make Winnipeg whole for the $40 million owed.
Further, fulfill your obligation and renew the five-year roads funding agreement. The city cannot alone raise the revenues needed to maintain roads — the foundation of our trade-dependent economy. Municipalities do not have the financial resources or capacity to shoulder the burden of public infrastructure on their own. Municipalities collect just 8 cents of every tax dollar.

Make infrastructure a priority
Since 2016, the provincial government has reduced investment in core infrastructure by $421 million, in budget cuts for highways, municipal roads and bridges and land drainage.

A bumpy compromise: Winnipeg puts gas tax top-up cash to local street budget
Winnipeg City Council voted on April 25 to allocate the bulk of the $43.9 million it is expecting from the federal gas-tax windfall toward the local streets program which was gutted in the city’s recently approved Operating and Capital budget. [keep reading]

No residential street work for Winnipeg in 2019? How is that possible?
MHCA pushes back on provincial short-changing, City of Winnipeg budget cuts
The MHCA has called upon Mayor Brian Bowman and City Council to restore planned investment in the local street renewal program for 2019, and future years, despite the provincial government’s reneging on funding commitments. That provincial decision shortchanged the city by $40 million in the 2018 local and regional street renewal budget, and would pull as much as $174 million from the city’s planning for street repairs, from 2019-2024. [keep reading]

Meanwhile, in Ontario and Saskatchewan, provincial governments have announced their economic plans ride on significant investments in infrastructure: 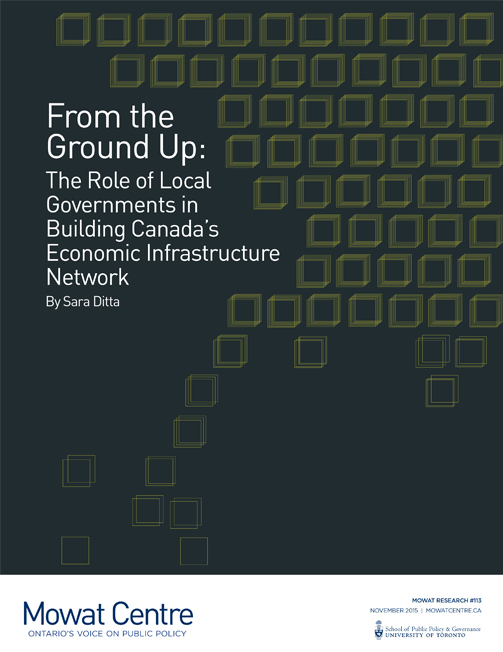 From the Ground Up: The role of local governments in building Canada’s economic infrastructure network 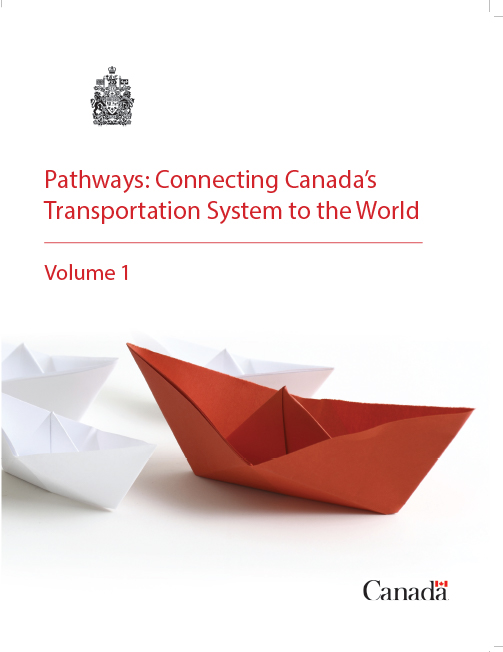 The Infrastructure that matters most: The need for investment in Canada’s trade infrastructure 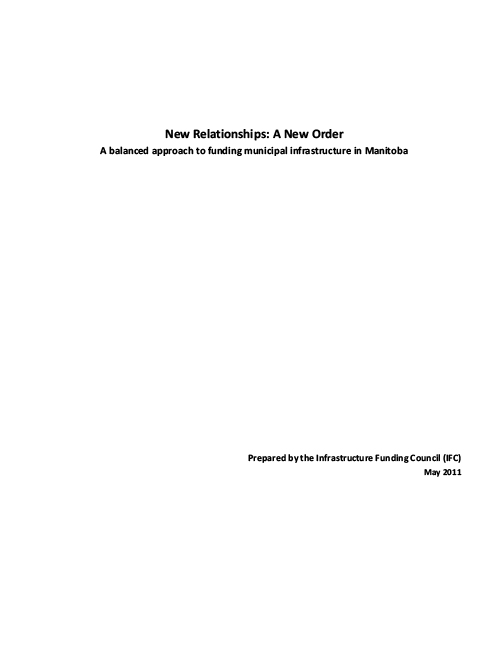 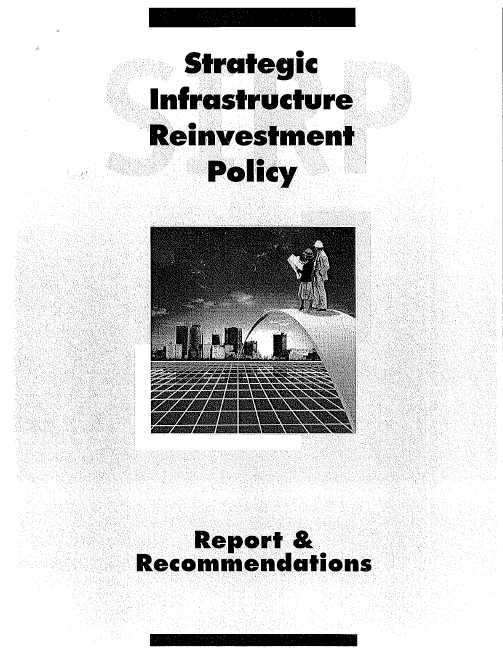 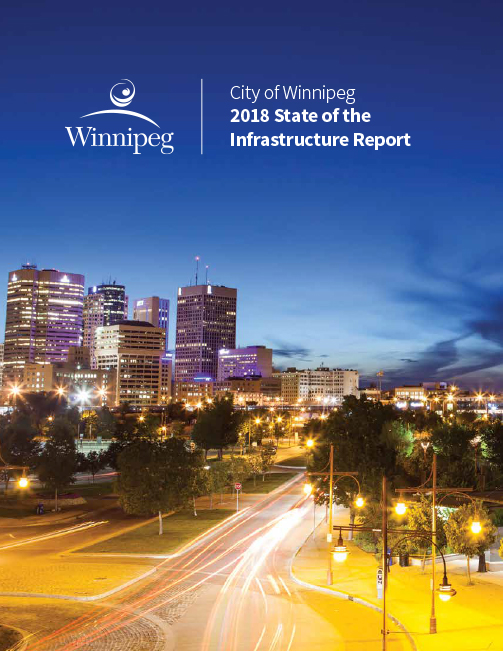 City of Winnipeg 2018 State of the Infrastructure Report