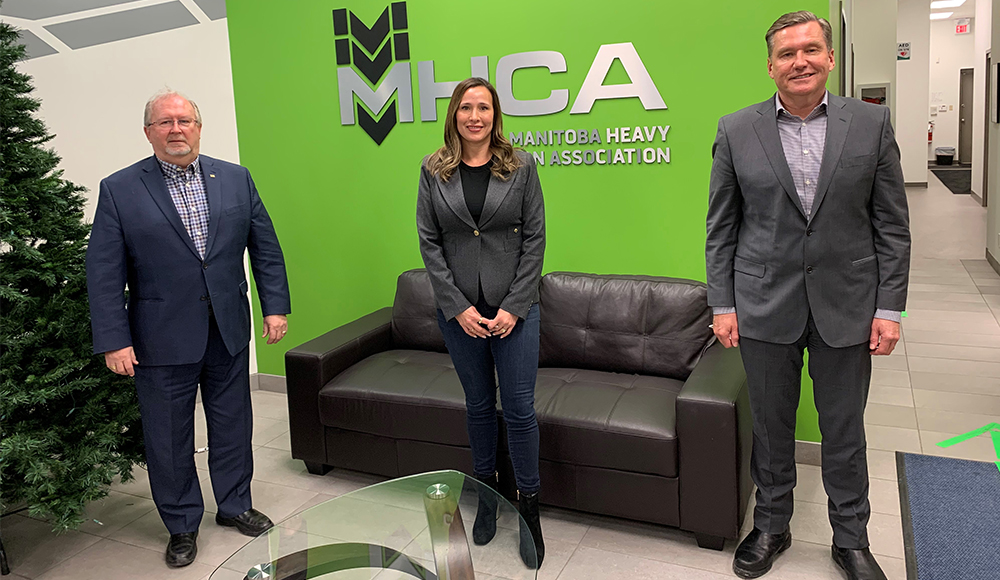 Transportation and Infrastructure Minister Doyle Piwniuk, who assumed leadership of the portfolio in January, says his department is very much focused on presenting multi-year budgets, starting with a three-year budget and moving to much longer-term program outlooks in years to come.

Chabot led the discussion by noting the MHCA anchors its advocacy in supporting economic growth in the province, and that investment in core infrastructure is very much a key to that as it is foundational to trade, which is 53% of Manitoba’s GDP.

“It is key to economic recovery and turning the wheels to ensure there’s (economic) growth and sustainability for the programs that serves the public,” she said.

MHCA President Chris Lorenc presented to the minister the case for a significant recapitalization of the federal trade corridor fund, especially to underpin a Western Canada Trade Gateway and Corridor Initiative (WCTG&CI), a proposal initiated by the Western Canada Roadbuilders and Heavy Construction Association.

The WCTG&CI would seek to bring together the public and private sector to develop strategy that identifies those trade-enabling infrastructure projects with the greatest return on investment to GDP – especially those that elevate the profile and productivity of Western Canada’s trade activity.

Lorenc stressed what Canada needs is to focus investment in shovel worthy, rather than shovel ready, infrastructure projects, because these are projects that are tied to a business plan, with readily verifiable returns to our trade productivity.

Manitoba Transportation and Infrastructure must be central to the province’s economic growth strategy, because of the transportation network’s intrinsic value to trade.

“Your (department) budget allows for repositioning of Manitoba as a significant player in global trade.”

Piwniuk said MTI is focused on trade, currently delivering the roll out of a long-term project to link provincial roads to trade routes that can reliably transport people, businesses and producers to their destinations. Further, the work on the Perimeter Highway is intent on turning it to freeway status, as a critical trade corridor in the Capital Region.

On the industry side, Lorenc said the infrastructure investment deficit, said to sit at about $9 billion — $6 billion for highways, and $3 billion for bridges – illustrates the need for sustained, significant increases to the department’s budget programs, including highways capital.

At present, the base highways capital budget is set to rise to about $387.5 million in 2022/23. There should also be additional funds rolled over from an underexpenditure in previous years and more funding from the provincial ‘economic restart’ program introduced for post-pandemic recovery.

Piwniuk said his background in financial planning convinces him that multi-year financial plans, such as long-term budget forecasts, are critical to assisting the industry in its own financial plans, allowing companies to line up their human resources, supplies and capital acquisition plans.

Lorenc said it is important to have that long-term program outlook, allowing significant flexibility in the budget and for the department to pivot to emergencies or as investment priorities shift in any given year.

But certainty in program value allows companies to be more productive, to grow and therefore make the industry itself more competitive, which returns better value to the government in tender bid prices.