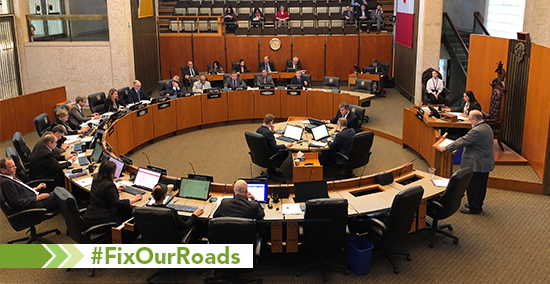 The MHCA does not like to be appearing before any public standing committee, and certainly of this Council, in opposition to something.

We have throughout our 76 years always attempted to advocate for solutions to challenges facing governments with public policy suggestions made in the public’s best interests.

You have not heard from the MHCA that the budget must be ‘this’ or ‘that’. You have always heard from us advocacy that encourages evidence-based decisions on infrastructure investments, to grow the economy and in line with principles that best serve our community, our budgets and municipal governments.

This budget cycle was no different.

To say that we are profoundly disappointed with the outcome of final EPC deliberations would be a huge understatement.

You asked us to push Manitoba to make good on its $40-million commitment.

You asked us to press Winnipeg MLAs to engage, to stand up for public interest, not partisan interest.

We did all of that and more. Our approach, I believe, has been factual, measured and balanced.

We agreed with you that provincial deficits should not be balanced on the backs of Winnipeg ratepayers.

But we also asked that you be consistent in that principle, and not load the impact of the $40-million deficiency on the backs of our women and men, whose incomes, livelihoods and families depend on work in our industry.

You asked us to provide you with considered options and we did.

Sadly, we have heard in response words such as “accept the new reality” – a phrase that, in our opinion, does not reflect the public’s best interest, nor its expectations at this time.

If our infrastructure, our roads were not in need of repair then — ok “what are you pushing for”? If our streets were in good condition — all of them – then, “what are you complaining about”? If we had eliminated the annual infrastructure funding investment deficit through difficult decisions including appropriate cash to capital contributions, we wouldn’t be here other than to support the budget.

But that is not what is before us.

Our residential and regional streets, by and large, are in deplorable condition.  We are facing a $3-billion deficit in funding for what exists and is required for our streets and bridges.

This year, the local program was cut by $30 million, compared to 2018’s program. This year, you wiped out all significant repair work on neighbourhood streets.

You chose to do that despite the fact you had options.

You have reserves, and a projected surplus. You have a budget that surely, like any other, always has room for adjustment.

With all of that and with a request that you bridge your $40-million shortfall over two years, we have silence from the budget.

If pipe, pavements and bridges are not an essential core function of civic government, we and I suspect the public, wonder then, what is.

Mr. Mayor, you have associated your candidacy for election and re-election as mayor of Winnipeg with, amongst other things, a focus on a sustained increased investment in the local and regional streets system.

You did that ahead of both of your elections.

The public accepted your representations not only because investment in roads is a No. 1 priority for much of the public, but because you demonstrated to a large extent delivery on that promise in your first four years.

In the second of your campaigns, you reminded the public of the historic levels of investment in the streets renewal programs.

We respectfully ask that as mayor of our city, you sponsor a motion to correct and adjust the budget priorities.

We ask Councillor Gillingham, based in part upon his stated concerns after the March 7 IRPW meeting when he first learned that as a consequence of the Preliminary Budgets tabled March 1, that there effectively was no residential streets programs for 2019, to second the motion.

WHEREAS the funding of new and existing local and regional streets system is a core civic government function;

AND WHEREAS Council has through policy and budget attempted to redress the infrastructure investment deficit though a combination of dedicated realty taxes, cash-to-capital contributions, debt financing and shared-funding agreements with Manitoba and the federal government;

AND WHEREAS Manitoba has short-changed Winnipeg ratepayers $40 million by refusing to pay said amount arising from the last year of a five-year funding agreement ending 2018, leaving Winnipeg taxpayers with a funding shortfall for 2019;

AND WHEREAS Manitoba has not committee to a new 5-year shared infrastructure funding agreement to success the one ended 2018;

AND WHEREAS an unacceptable immediate impact is the effective elimination of the 2019 local streets program which is unacceptable to Winnipeg ratepayers and inflicts further damage to the streets system;

AND WHEREAS the total Budget revenues for 2019 are estimated to be $2.5348 billion and projected expenses are estimated at $2.527 billion leaving a projected surplus of $10.7 million;

AND WHEREAS the federal budget tabled March 19 commits to double the level of funding available to municipalities in 2019 through the Federal Gas Tax which could mean more than $40 million in additional capital funding in 2019 to Winnipeg;

AND WHEREAS all such previous funds received by Winnipeg have been allocated by Winnipeg in support of its local and regional streets system;

NOW THEREFORE BE IT RESOLVED AS FOLLOWS:

The impacts are immediate and would be supported by Winnipeggers, and they are:

We oppose this budget not because we oppose all of it. As we said when it was first released, there are many good aspects to it.

We regret to say that without your adoption of the proposed or similar motion, we oppose your adopting the 2019 Preliminary Operating & Capital Budget, as presented.